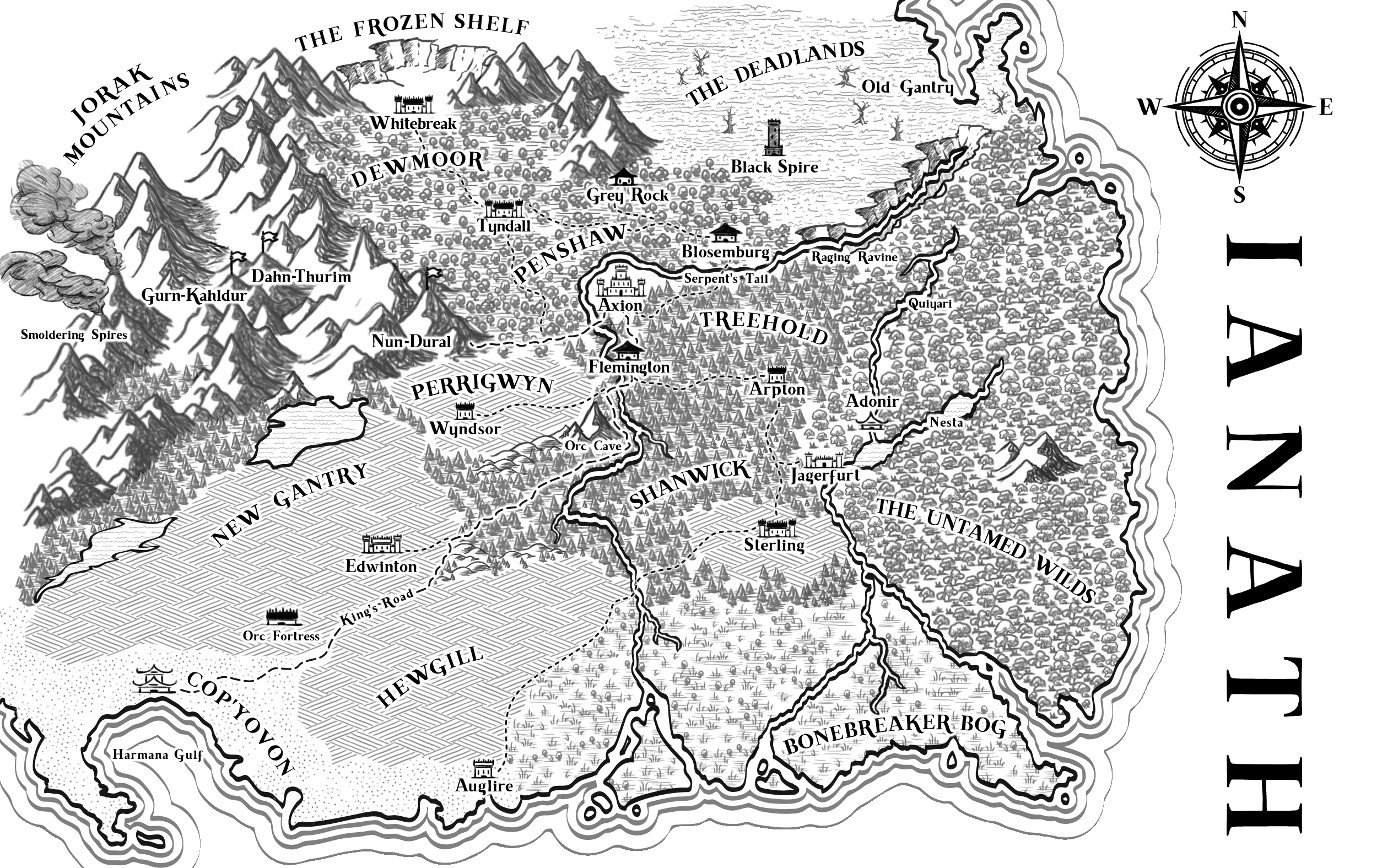 Bonebreaker Bog – the swamps to the south where ancient ruins dot the landscape and dangers abound.

Deadlands – the land to the north where the ground is scorched and nothing grows. The Deadlands are where the fallen kingdoms of men lie and where the dead walk the earth.

Frozen Shelf – a desolate tundra to the far north. Few venture to the dangerous, icy landscape.

Smoldering Spires – the land west of the Jorak mountains full of dangerous beasts and volcanoes.

Untamed Wilds – an enchanted forest to the east. Those seeking adventure travel to the wilds to hunt the massive creatures that fill its forests. The wilds are also home to a handful of remote elven communities.

Adonir –an ancient elven city within the Untamed Wilds. The first established city of elves, Adonir remains isolated and devoted the balance of nature.

Axion – the capital of the human kingdom and seat of the palace, Axion sits in the center of the known world and is the last standing stronghold of men. Axion is commonly known as “The Golden City” for the yellow stone the city is built from.

Blosemburg – a sad, desolate town situated beside the Serpent’s Tail.

Cop’yovon – a wealthy, elven port city to the southeast. Cop’yovon makes it money in trade and is home to the prestigious Dancing Blades Academy, a school where elven youngsters train in magic and bladework.

Flemington – situated along the river known as the Serpent’s Tail, Flemington is a village just a day’s walk from the capital city. It is a common stop for tourists and others visiting the city of Axion.

Jagerfurt – the walled city on the outskirts of the Untamed Wilds, Jagerfurt is a common tourist destination for those seeking adventure or profit in the wilds.

Nun-Dural – a dwarven city-state and the dwarven capital of trade set within Mount Carthas, Nun-Dural shares a strong relationship with the human kingdom and is much more open to outsiders than its other dwarven counterparts.

Primeval Realm – another plane where nature is beautiful and terrifying and monsters both large and small abound.

Shadow Realm – another plane full of shadows and death.